Find the best hotels in Rome and attractions to fit your itinerary.

Take a look at Rome's top rated and most preferred hotels. 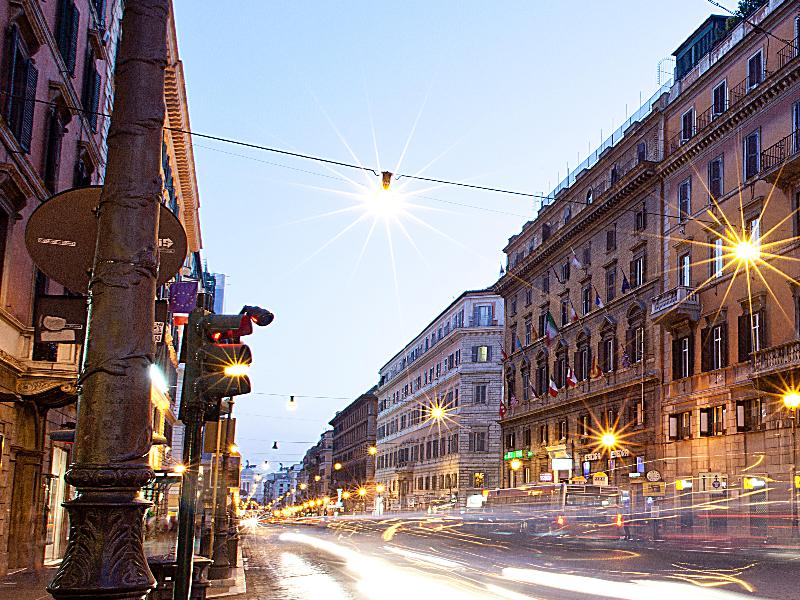 Rome’s history is vast and magnificent, reaching thousands of years in the past. The iconic global city, heralded as the “cradle of western civilization” for having laid the foundation of modern society, began as just a small settlement on Palatine Hill beside the Tiber River. Over the next couple thousand years, that village grew to a massive empire, witnessed the birth of Catholicism, and became the modern metropolis and capital of Italy that we know today. The city offers many Rome hotels close to its most famous features and attractions; those looking for cheaper hotels in Rome can easily find hostels and midrange options in other parts of the city.

With such a long history, Rome features many preserved historical places and beautiful ruins. Among the most well-known ancient Roman sites are the Roman Forum, the Colosseum and the Pantheon. The latter is among the best-preserved sites in the city. Rome also encircles Vatican City, an independent city-state that has its own share of historical sites, such as St. Peter’s Basilica and the Sistine Chapel.

As one of the most influential European cities in art and fashion, millions of tourists flock to Rome each year.

Where to Stay in Rome

Rome hotels are a bit pricier than other cities in the region, but it’s to be expected in such a famous and storied history. The cheapest hotel rates start at €30 per night. The most expensive and best hotels in Rome, Italy can run up to about €250 per night. Being such a large and popular city, there is no single best location to stay in Rome—Rome hotels are everywhere!

For sightseers, the best place to stay in Rome is downtown, close to some of the city’s biggest attractions like the Pantheon. While these hotels in Rome, Italy may be more expensive, their location and convenience are unmatched. Choosing the best location to stay in Rome based on the sites you want to see can also save on transportation costs. Best Pantheon B&B is a great and relatively new bed and breakfast that’s just a 5-minute walk from the Pantheon and metro.

Another best place to stay in Rome is right outside Vatican City, keeping you close to beautiful and popular historical attractions. Vatican Station Rome is among the best hotels in Rome when it comes to proximity to mass transport: it’s close to the metro and several bus lines, and affordable too. Almandi Vaticano Rome is among the most luxurious Rome hotels, stationed right across the street from Vatican City.

Among luxury Rome hotels includes The Inn at the Spanish Steps, which is just what it sounds like: a fashionable, boutique hotel overlooking Rome’s famous Spanish Steps in the heart of the city. It offers a great view for people-watching. The St. Regis is one of the prettiest Rome hotels, with stately and ornate rooms. In fact, the hotel itself was originally built as a palace.

Hostels make great Rome hotels for those on a tight budget or who want to get to know other travelers. Funny Palace is a cute, lively dorm-style hostel near Termini station. It’s an excellent location with fashionable rooms. Hostel Alessandro is an attractive Rome hostel with spacious rooms, and is also close to Termini.

The Most Important Sights to See in Rome

Just wandering around the city is sure to be a feast for the eyes, but if there’s anything you should see in your visit, it’s Ancient Rome and Catholic Rome. Ancient Rome is made up of the Colosseo and Old Rome neighborhoods, and contains the Colosseum, the Pantheon and Baths of Caracalla. Exploring these ruins and historical sites is like stepping into an enchanting high-fantasy movie!

Catholic Rome is made up of the more than 900 old churches throughout the city. If you are catholic, attending a mass at one of the old churches is a breathtaking experience. Any visitor can appreciate the beautiful, opulent architecture at Vatican City in central Rome. When visiting the many beautiful Roman churches, it’s a good idea to dress conservatively—otherwise you may be turned away.

When in Rome, try a pizza! Roman pizzas are a bit different than the ones you’ll find at home. These pizzas are thin-crusted and very crunchy, typically with less toppings than you would find on one from Naples. Another Italian classic to try is Italian ice, which is a cool summer treat on a hot day. Like other Italian cities, Rome takes its coffee culture seriously, often with an espresso paired with a pastry. Fragrant cafes line the city streets; stop by Giotti—established in 1900 and a favorite for local politicians—or the baroquely decorated Canova Tadolini for excellent cups of coffee.

The best neighborhood for Roman dining is Testaccio along the banks of the Tiber River. Stop by Da Remo for a traditional Roman pizza or Augusarello for a homecooked-style meal. Trastevere is a Bohemian, cobblestoned neighborhood offering great seafood and fine dining. Glass Hostaria is among the Michelin-starred restaurants you’ll find here.

As a fashion capital, Rome offers plenty of opportunities to shop. Here you’ll find fashion, jewelry, art and fine delicacies. If you’re looking for the best high fashion the city has to offer, start at via Condotti and the streets that surround it. This area features Armani, Hermès, Gucci and other luxury brands, as well as smaller boutiques.

Eroma2 is an enormous shopping center with over 230 stores. The mall is beautiful, and you can bet you’ll find whatever you’re looking for there—including a bite to eat. It’s a great place to spend a rainy day. Finally, be sure to check out Porta Portese, the city’s biggest flea market, to discover some unexpected treasures.

For a night on the town, visit Campo de’ Fiori. This area is known for its nightlife and is saturated with bars and restaurants. It’s a favorite spot for both locals and tourists, and isn’t very expensive. Go bar-hopping then end the night on the dance floor at I Giganti, one of the area’s popular clubs.

Testaccio is the city’s main clubbing distrct, often crowded with rambunctious, late-night revelers. Popular clubs here include Akab and Vilaggio Globale. While Campo de’ Fiori is rather casual and relaxed in its clientele, Testaccio is more hip, fashionable and dressier. If you plan to visit the city for partying, be aware that many clubs in this neighborhood close during July and August.

One of the most visually striking summer music festivals in the city is Roma Icontra il Mondo. The draw of this festival—aside from the amazing international musicians participating—is the setting. Beautiful lines shine on the surrounding lake in Villa Ada, creating a unique atmospheric glow into the evening.

The annual Rome Chamber Music Festival offers highbrow entertainment for the discriminating audience, and performances consistently sell out each year. It features both established and young artists from around the world. If you want to be moved by haunting performances in the beautiful Gonfalone Oratory, book your hotels in Rome for June!

For something more contemporary, check out the Artist in Rome Experience Festival. This show has an eclectic mix of artists and genres, and even displays visual and performance art as well. It’s a great who’s-who of the contemporary Roman arts and music scene, and shouldn’t be missed by those who love art and music.